OK ........ I have committed myself, my new pottery teaching studio, at the Coach House in Elsdon , Northumberland, will be ready for the end of the month and I'm launching my first workshop there on March 6th & 7th. This will be a two day workshop on Prehistoric Pottery. 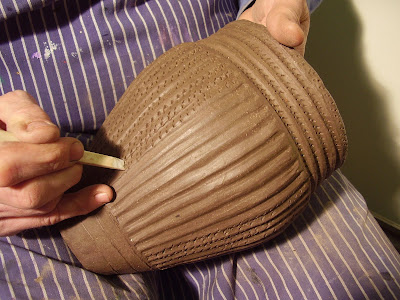 This workshop will equip participants to; prospect for natural clay and prepare it for pot making; make their own prehistoric tool kit; make and decorate replicas of prehistoric pots and fire them in an authentic manner. As it is not possible to dry the pots sufficiently to be able to open fire them during the two day course, firing is offered as a separate one day event. In some cases it will be possible for participants to attend a firing workshop on the following day although this will not allow them to fire their own pots made during the workshop.

All materials and equipment will be provided. All pots and tools that you make during the workshop are yours to keep. Information sheets will be provided to help you continue potting once you return home.

Accommodation and travel are not included but list of local accommodation providers is available on request.

Elsdon is situated in the Northumberland National Park and you will need your own transport as it is virtually impossible to reach it by public transport.

11-00: Raw Materials: How to find and prepare you materials. We will look at the types and sources of raw materials and their storage. All participants will prepare their own clay with appropriate inclusions.

13-00: Tools of the Trade: All participants will make their own Bronze-Age Pottery Toolkit including; combs, scrapers, cord, modelling tools etc.. Using materials such as: Birch bark, Bone, Antler, Slate, Shell, Wood, Flint etc. The tools will be based on marks found on the pots.

10-00: Making & Decorating; beakers, food vessels, collared urns, etc. With lots information, hints, tips, help where needed and encouragement, all participants will have the opportunity to make at least two pots.

12-00: Lunch with Traditional African Firing video presentation of a firing method which is closely related to Bronze-Age techniques.

Additional Day: (Preferably after a break of at least one week during which time the pots will be stored in a warm place to dry them thoroughly). If you have travelled far, you may wish to leave your pots to be fired (there will be a handling and shipping charge for this service) or to take them home and fire them yourself.

10-00: Open Firing: The pots will be fired in an open or “bonfire” firing, this is a slow process and will involve quite a lot of sitting around the fire. Firing is a slow process which cannot be rushed, so there will be the opportunity to make more pots, discuss the work that we have done during the workshop and stare distantly into the hot coals of the fire. I would suggest a “bring and cook” barbeque lunch may well add to the “Hunter-Gatherer” atmosphere and could help with a theory of mine that most Bronze-Age pots would have been made around the domestic hearth.

For prices and more details contact me at info@pottedhistory.co.uk 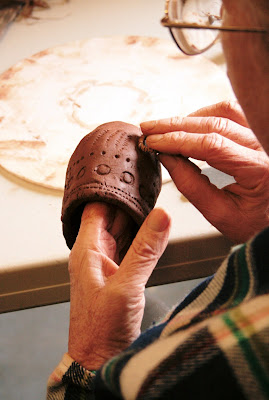 Visit my website at www.pottedhistory.co.uk
Posted by pottedhistory at 15:35 No comments:

I've been trying my hand at some rather poor film making (OK those of you who have read my mini rant about experimental archaeology (below) would have every right to say don't make a film without asking someone who knows what they're doing, and you'd probably be right). That said my intention has been to record some of my methods rather than make an Oscar winner.
Here is one that I put together which shows me making the large Anglo Saxon pot for the Yeavering Exhibition, it's more of a slide show than a video but it gives an idea of how I work.
The technique of hand forming pots differs from one part of the world, indeed in Lesotho I found that it differed from one village to another and even from potter to potter. The one thing that I am pretty certain about is that it probably never uses the technique which is so often taught in schools where coil after coil of clay is places on top of its predecessor in the rough shape of the finished pot and then finally smoothed together. This is why I tend to avoid the term 'coiling' because this is the image that it conjures in the mind.

But as you will see from the video, my technique which is much more akin to the techniques I have seen used in Africa, forms the wall of the pot as each new coil of clay is added. It also results in the sort of diagonal joints that have been reported in much prehistoric pottery. 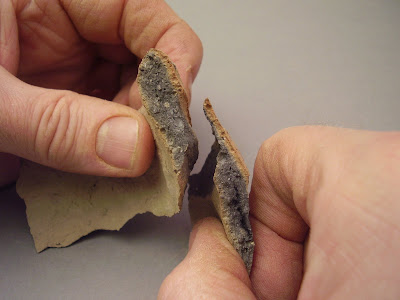