While my days are usually spent in prehistory, Roman Britain or the Anglo Saxon period, my claim the "If it's old and made from clay, I can replicate it" was tested in a rather unusual way recently when I was asked to make replica Second World War (WW2) mugs for the NAAFI at Dover Castle.  These were based on broken mugs found on the site. 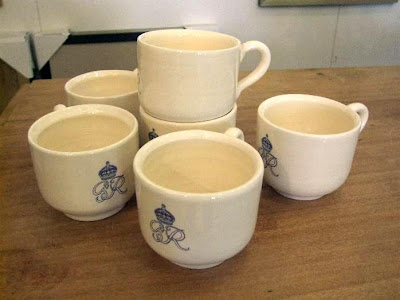 They are now part of a reconstructed interior setting where they are ready to be filled with kye, a robust concoction of dark chocolate, condensed milk and sugar.  In the interests of developing my understanding of the people who used pots in the past I actually tried a cup of kye; possibly the sweetest thing I have ever tasted.  You can find more about Kye or Kai on this site Rum Ration on The Navy Network including a recipe, try it if you dare!  Also check out Dover Castle, now that's a day out!

Bamburgh Castle and the Laidley Worm

Completed at last, the series of interactive panels for Bamburgh Castle, upon which I have been working for some months.  They illustrate the story of the Laidley Worm and will be situated around the castle so that visitors can seek them out and take rubbings from them.  Look out for them, they'll be in service pretty soon.

THE LEGEND OF THE LAIDLEY WORM 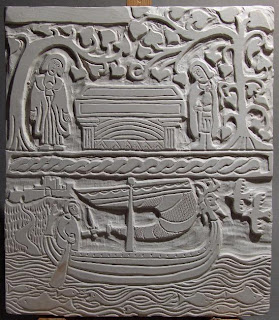 Long ago in the mysterious time of magic that we now call the Dark Ages there lived at Din Guayrdi King Ida.  Sadly Ida's wife, the queen, died leaving the King, his daughter Margaret and his son Child Wynd.  Child Wynd decided to set sail to seek adventure and fortune beyond the seas while Margaret remained to comfort her father. 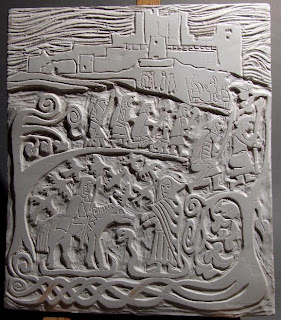 One day while he was out hunting in the forest Ida met an enchantress, Behoc and fell instantly in love with her. In jubilation Ida brought his new love back to the castle to meet Margaret. 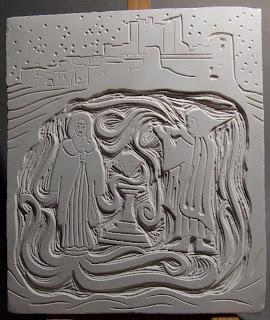 But Margaret was suspicious of Behoc who perceiving Margaret to be threat pretended to offer friendship and invited her to visit a cavern beneath the castle where a magnificent gem lay hidden.  But it was a trap and Behoc cast a spell over Margaret 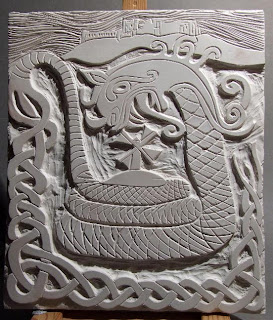 About this time there came terrible news of a most Laidley (Loathsome) Worm which was terrorising the countryside around the village of Spindlestone. 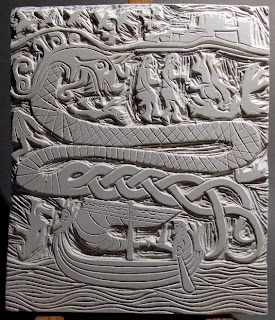 News of of the evil doings of this terrible creature spread far and wide eventually reaching the ears of Child Wynd who sailed day and night to return to his native Northumbria. 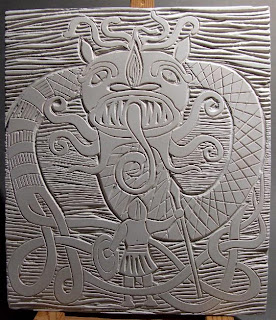 Hunting down the worm Child Wynd eventually confronted the worm and showing no fear challenged the beast.  And yet as he did so his heart was softened when he saw a tear fall from the worm's eye, 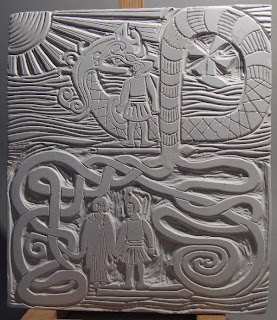 The worm told Child Wynd that it was in fact non-other than his own sister Margaret bewitched by Behoc and that to lift the spell he must kiss the beast three times.  Summoning all his courage Child Wynd did as the worm asked and as he delivered the third kiss he found himself stand next to his beloved sister. 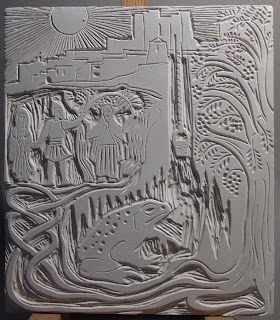 Returning to the castle Child Wynd took a branch from a Rowan Tree, potent with the forces of magic and touched Behoc with the branch.  Immediately she was transformed in to an ugly toad and Child Wynd picked her up and dropped her down the castle well into a secret cavern, where she remains imprisoned to this very day, awaiting a kiss to release her from her bondage.  I suspect she will wait a very ... long ... time!
Visit my website at www.pottedhistory.co.uk
Posted by pottedhistory at 14:51 4 comments: