HYPOCAUST HITS THE STREETS OF SKIPTON 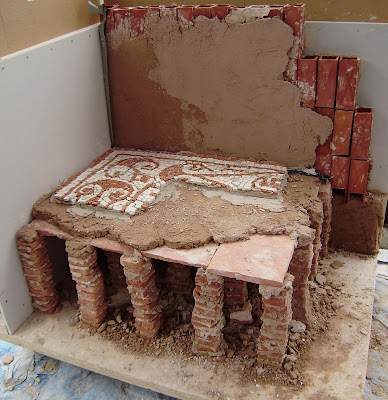 The hypocaust under construction

It’s amazing what you can end up making as an historical potter: Children from several Skipton schools had some fun recently, when they assisted me in the rather unusual task of constructing a half scale Roman Hypocaust, or central heating system, on the pavement outside the Craven Museum on Skipton High Street. I had made and fired all the necessary parts; nearly over two hundred pilaster bricks, seventy tubular box tiles and innumerable tessarae for the floor mosaic, over the preceding few weeks and the children helped with tasks such as brick laying the pillars which support the floor, setting the floor slabs in place, constructing the walls from tubular box tiles and creating the mosaic to surface the floor. By Friday afternoon the construction phase was complete the mosaic had been set in place and all was ready for the final phase, lighting the fire and making it work. The weather obliged with a steady downpour which made the task more difficult but set the wintry atmosphere in which a centrally heated villa might seem right at home.

As the small charcoal fire beneath the floor crackled into life, the box flues drew the warm air up into the walls and modern temperature sensors recorded the steady rise in temperature above the floor seeing it soar to 120 degrees F, almost 50 degrees C. The model was so successful it has now been moved into the museum where it takes pride of place next to the architectural ceramic finds from the Kirk Sink Villa at Gargrave where it is helping to explain the function of the various artefacts.

Visit my website at www.pottedhistory.co.uk
Posted by pottedhistory at 16:38 No comments: 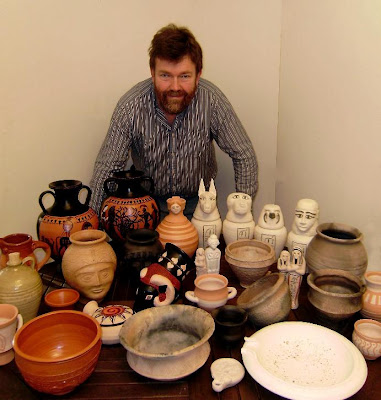 It's a bit of a cheat but I'm simply going to post the essence of the article that was published in the local paper regarding this topic. The pot was well featured in the programme and looked the part:

When the researcher for BBC2’s “Supersizers Eat... Roman” was looking for a specialist piece of Roman pottery to use in the programme, she knew exactly who to contact- historic potter and experimental archaeologist Graham Taylor.

Stepping into Graham Taylor’s Rothbury workshop is like a form of time travel. Neolithic urns, Bronze Age beakers, Roman amphorae and orange samian ware, sit next to jackal eared Egyptian canopic jars and medieval jugs. It’s like a cross between a museum store room and a bizarre film set. But this is the home of “Potted History”, where national museums, film makers, theatrical companies and TV production companies are coming to commission historically accurate replicas of pots.

“Most of the time I recreate items for museum handling collections- so that members of the public and schoolchildren can handle items exactly like the ones they can see in the museum display cases. But I also make pieces for archaeologists to “test to destruction” by cooking in them- using authentic historical recipes.”

“I was delighted to be able to supply ”Supersizers” a mortarium- the Roman equivalent of the food processor, as I’d enjoyed watching food critic Giles Coran and presenter Sue Perkins eat their way through various eras in the earlier series of the programme. When I heard that they were doing Roman food, I realised that it would be a big challenge for them. The Romans ate some things that we would recognise today- like bread and various meat dishes, but they also loved a fermented fish sauce known as garum or liquamen, which they exported right round the Empire in specially labelled amphorae and even added to sweet dishes. The mortarium was a vital piece of equipment in a Roman kitchen as it was used to do everything from making pesto type sauces from herbs, to grinding up meat for sausages and pates.

There’s something very special about sending a Roman replica pot off to Rome itself to be filmed in use. Apparently the Roman chef on “Supersizers” enjoyed using it so much that she became quite attached to it. But I don’t think that Sue Perkins was quite as keen! On being asked what her least favourite dish had been for the entire series she said that the Roman meal had featured three of the most awful things she’d ever eaten: a cow’s udder pâté, duck’s tongue and a pig’s womb stir-fry. So we may not be getting any delicious recipe tips from the programme, but it does sound like excellent viewing.”

Supersizers Eat Roman is scheduled to be the final episode of the new series of 6 programmes on Mondays, on BBC2 at 9pm.
In the meantime you can see examples of mortaria, liquamen amphorae and other Roman style pottery online at http://www.pottedhistory.co.uk/ or on display and for sale at Crown Studio Gallery, Bridge Street Rothbury.

Visit my website at www.pottedhistory.co.uk
Posted by pottedhistory at 16:25 No comments: