On May 31st I, with the help of two of the stalwart Vindolanda volunteers, fired the newly built replica Roman pottery kiln at the Vindolanda Museum: See my earlier post Roman Pottery Kiln and Workshops at Vindolanda.

44 pots of varying sizes were packed tightly into the chamber, tile/amphora sherds (actually roughly made curved slabs of fired clay) were then laid over the pack.  On top of this a very coarse mix of mud, gravel and organic material was spread and finally I plastered a mix of sand and clay over the surface, leaving three exit flues at the back of the kiln, through which hot gasses could escape.

I'd made the decision to attempt a black-burnished ware / greyware firing which involves starving the kiln of oxygen towards the end of the firing causing an intensely reducing atmosphere within the chamber.  This has the combined effect of pushing carbon deep into the pores of the clay and converting iron oxide within the clay body from its red Ferric form to black Ferrous oxide.  In the case of this firing this was achieved by closing down some of the exit flues for the last 200 degrees and, once we had reached the target temperature of 900 degrees, completely sealing the top of the kiln then stoking as much fuel as possible into the firebox and then sealing it closed. 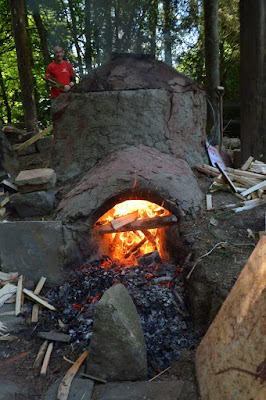 The kiln was lit at 8:30am and we began sealing the kiln at 6pm giving a total firing time of nine and a half hours and an average temperature rise of 95 degrees per hour. Once begun, firing is a continuous process, even being distracted for a few moments can result in a temperature drop. As a 21st Century potter I have the advantage of an thermocouple and pyromenter (High temperature thermometer) my Roman predecessors would have had no such technology at their disposal.  Their temperature measuring techniques would have relied on their senses: in the early stages of firing a potter needs to take things very slowly, ensuring that trapped moisture in the clay doesn't blow his/her pots apart, a hand placed over the exit flue will give an indication of temperature and whether the gasses are moist or not; once the kiln is over 600 degrees C the colour of the pots in the chamber, seen through the exit flues will give the potter all the information they need. 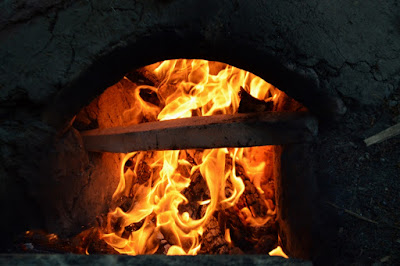 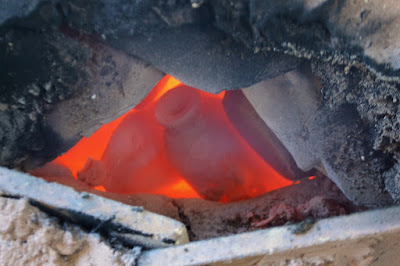 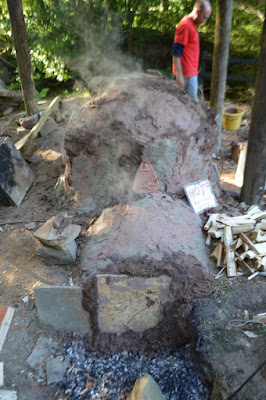 I arrived to open the kiln at noon the following day and upon opening one of the exit flues was surprised to smell smoke, and by the level of heat emanating from the kiln. I realised that the fuel in the firebox had converted to charcoal and that, with the influx of oxygen caused by opening the seal, it was about to reignite.  We therefore opened the firebox and immediately raked out all the accessible fuel which did indeed immediately burst into flame. We then resealed the kiln because the pots were obviously too hot to unpack, unfortunately not having anticipated this turn of events, I had not brought the pyrometer with me and there fore while I knew it was hot, I didn't know how hot!  If fired pots are cooled through the 250 to 200 degrees stage too quickly they can crack, known as "dunting", this is caused by the fact that silica molecules within the clay rearrange themselves at 226 degrees, so it's safest to wait till the kiln is below 200 degrees to open it. After a trip to my workshop to collect the pyrometer, we returned to the kiln at 4pm by which time the temperature was 186 degrees  and the decision was taken to open it. 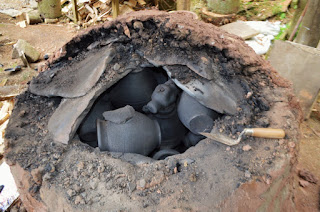 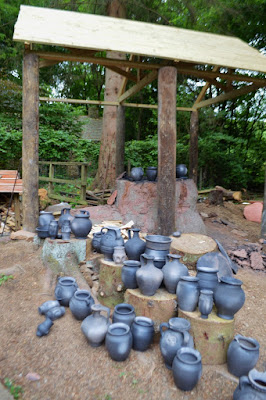 I think the results speak for themselves, everything was well coloured by the reduction, the variations from pale grey to black being very much in keeping with Roman originals.  If you'd like to own one of the pots from this firing watch the Vindolanda website and my Blog for news, or drop me an email and I'll let you know when they come up for sale. 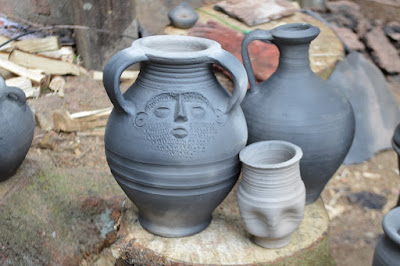 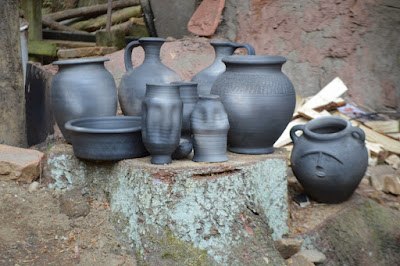 Visit my website at www.pottedhistory.co.uk
Posted by pottedhistory at 04:21 No comments: