The Eagles Have Landed Installation at Tullie House Carlisle

OK I'm going to try to catch up on some of the projects that I've been involved in over the past year, they might not be in chronological order but here goes.

First I have finally installed the sculptural piece that I made along with students from Burnside Business & Enterprise College at Wallsend.  (Click here to see my earlier post) It's situated in the Border Galleries, not in the new Roman Frontier Gallery and, if I do say so myself, I think it looks pretty good. 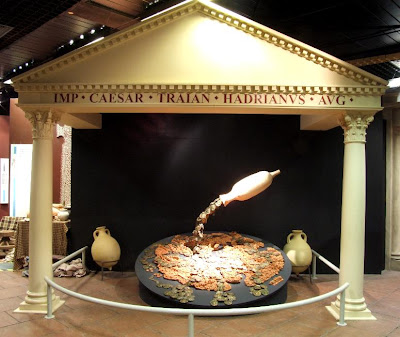 The piece features a Haltern70 Amphora pouring out coins across a map of the Roman World and represents the idea of Rome as a global commercial enterprise. 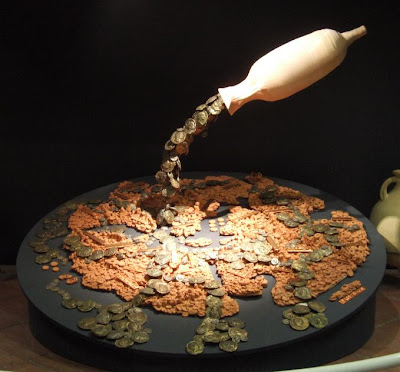 The map itself is composed of terracotta fragments each one bearing the thumbprint of one of the students that made it.  Since the most common artifact on a Roman site is usually  the pottery sherd it seemed appropriate that the empire should be represented by this medium. 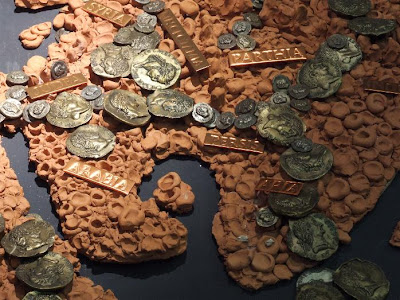 The coins bear the heads of emporers like Galba, Titus, Vespasian, and the provinces of the empire and beyond are named on embossed copper plaques. 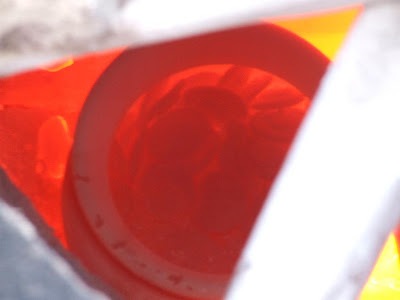 The Amphora and the coins were fired in one of my Roman kilns and here you can see a pot full of the coins glowing red hot in the fire.
Visit my website at www.pottedhistory.co.uk
Posted by pottedhistory at 09:38 No comments: