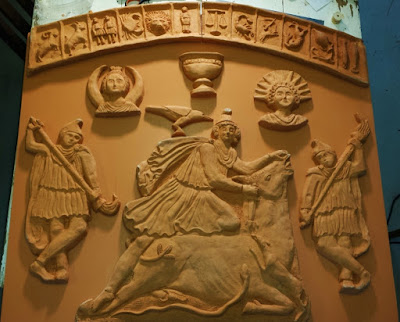 Although most of the pots and ceramic pieces that I make are direct replicas of archaeological artefacts commissioned by museums, universities, reenactors and collectors, I also receive from time to time, commissions from architects and interior designers. My most recent commission for such a piece came from Robert Renak Interiors, for a new Wetherspoons in Chester and as such he was looking for a Roman themed statement piece, over two meters wide, to dominate a wall in the venue. When it comes to spectacular Roman wall panels it's hard to beat a Mithraic Tauroctony and it seems the client agreed.

The panel still in its wet state

Hand sculpted from Terracotta clay, this panel known as a “Tauroctony”, represents the Roman God Mithras killing the Primordial Bull, possibly giving rise to all other life on earth. It would have been mounted on the wall of a Mithraeum, or Temple of Mithras, above the altars. There is still much that we do not know about the cult of Mithras, but in this scene Mithras is flanked by Cautes and Cautopates holding raised and lowered torches, probably representing the rising and setting of the sun. Sol, the Sun with his crown of rays and Luna, the moon winged with the crescent behind her head, look on from above. A raven brings messages to Mithras and above the arch of the heavens displays the signs of the zodiac.

On each of the side panels Mithras is seen hunting while fires burn on altars in woodland. These panels I have created using what is known as Barbotine method, that is to say slip applied using the same coloured slip as the background clay to achieve a low relief decoration. It's a technique that the Romans used in the Rhine Valley, and in the Nene Valley to create hunt cups and magnificent vessels like the Colchester Gladiator Cup. 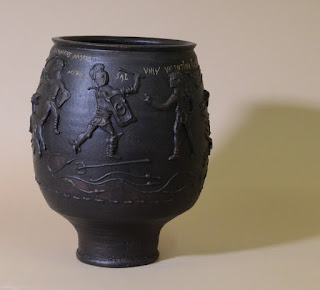 This is not the first interior design commission that I have made for Wetherspoons, these Amphorae now grace the entrance of “The Mile Castle” on the Westgate Road in Newcastle. 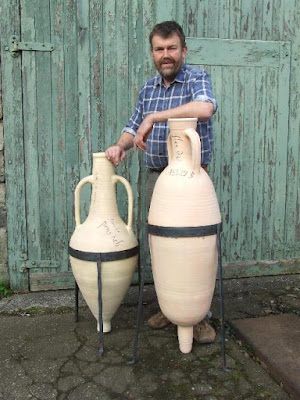 If you're looking for something spectacular and ceramic be it a pot, a sculpture or a wall panel, from whatever historical period or culture, give me a call.

Visit my website at www.pottedhistory.co.uk
Posted by pottedhistory at 15:07 No comments: